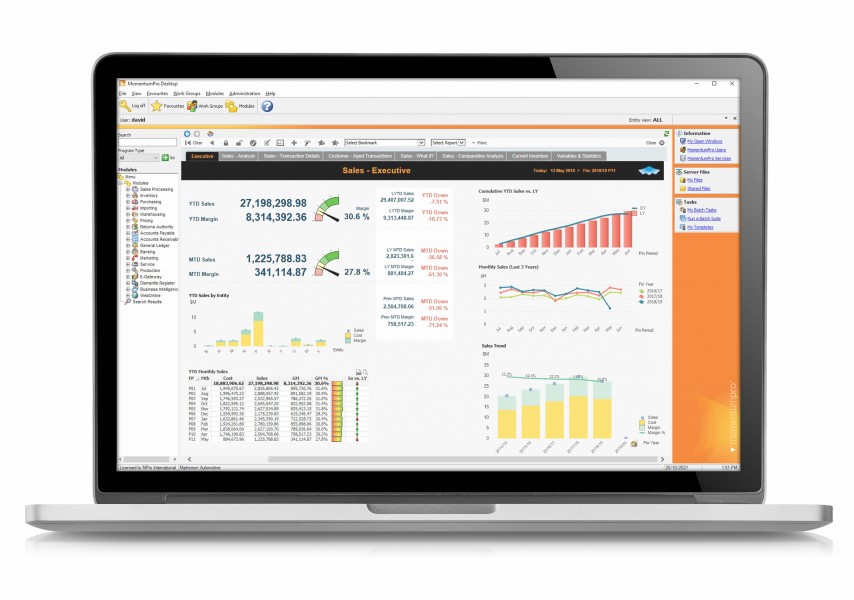 In celebrating Burson Auto Parts’ 50th Anniversary, the Australian company pays tribute to the many long term supplier partnerships that have helped it become the nation’s preferred trade supplier of automotive parts, tools, equipment and accessories.

One of the most enduring Burson Auto Parts alliances can be found with the company’s business software solutions provider and innovator, Markinson. Over the past 25 years, this company has accompanied Burson Auto Parts into the digital age through its industry leading Enterprise Resource Planning (ERP) based integrated business software solutions.

Markinson’s world class MomentumPro warehousing and inventory management software system first replaced the cumbersome manual processes in April 1996. This was the start of the complete digital transformation of the Burson Auto Parts business and with it came several initial challenges.

“The co-operation that we have always received from the Markinson team over the years has been a stand out factor of our long term alliance with the company,“ recalled Burson Auto Parts National Trade Sales Manager, Mario Baric.

“It wasn’t easy to make this transformation, but we worked together to ensure that our warehousing and inventory control software systems were perfectly integrated across our business from the stores to the sales reps on the road and everything in between,” He added.

The improvements in efficiency across the entire Burson Auto Parts business, particularly in stock ordering, customer service and inventory control across the company’s several warehouses, represented major leaps forward through the constantly developed, improved and customised Mopro (MomentumProERP) system. Updated versions of this system continues to power the back-end of Burson Auto Parts’ trade sales and warehousing operations to service more than 200 stores and nearly 30,000 loyal trade customers to this day.

“The demands of providing the level of customer service that we do for our trade customers are major. Each customer can have anywhere up to fifteen Burson Auto Parts deliveries made within 30 minutes of each order across every single day from more than 200 stores. This requires inventory control software that must be very reliable, easy to use and highly efficient,” Mr Baric stated.

The most recent major endeavour for the Markinson and Burson Auto Parts business involves the warehousing integration software currently being used in the enormous new Bapcor Distribution Centre in Melbourne which is currently in the process of replacing several smaller Burson Auto Parts (and other Bapcor owned companies) warehouses. This has seen a major level of enhanced inventory control software development and integration from Markinson.

According to Tim Vriend, Burson Auto Parts Digital Operations Team Leader, “Markinson’s willingness to make changes to their software systems, tailor making the software to best suit our requirements, has been the most outstanding factor of our long term relationship.

“Being involved with us from the very start of the digitisation of Burson Auto Parts has given the Markinson team an acute understanding of our business and the highly demanding customer service efficiencies that are required in order to provide the best service to them.

“The ability for us to quickly find parts, especially non-core product parts, is fundamental to our success. As our inventory levels and automotive aftermarket product ranges increase, our systems need to stay ahead and Markinson has worked together with us for 25 years to ensure that this is the case,” Tim stated.

Mark Clearwater, the CEO of Markinson, which is celebrating its 35th Anniversary this year, attributes the long term Burson Auto Parts relationship to an outstanding level of trust and co-operation over the past quarter century.

“The mark of a true partnership is that we have grown and learned together over our long relationship. Over the years we have encountered challenges, however with transparency and trust these have been easily resolved,” Mr Clearwater stated.

“I am really proud that our reputation with the team at Burson Auto Parts is that ‘we always deliver’ We discovered very early that by testing a new product or product extension with our most trusted clients that this would be a win-win for both of us,” He added.

These sentiments are echoed by Burson Executive General Manager, Trade, Steve Drummy. “The Burson Auto Parts 50 year history of success would not have been possible without the support of our many long term product and service suppliers. Markinson is one example where the development and integration of ERP based business software has assisted to digitise the company’s operations, setting it up for continued growth and even higher levels of efficiency well into the future.”