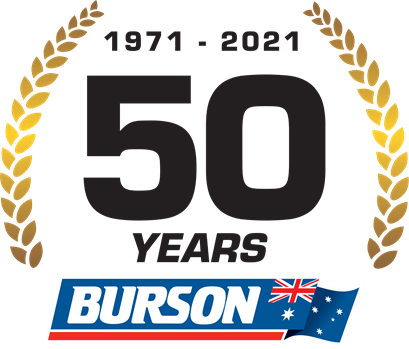 The Burson Auto Parts true blue success story started in 1971, when company founders Ron Burgoine (the “Bur” in Burson) and Garry Johnson (the “Son” in Burson) began selling auto parts to Victorian automotive workshops from the boots of their cars. The entrepreneurial duo progressed to larger and more heavily stocked cash vans as they gained a loyal and constantly growing set of satisfied trade customers across the state.

The first Burson Auto Parts distribution store was opened in the Melbourne suburb of Braybrook in 1978 and this heralded the start of a gradual period of solid growth for the small company, who were taking on more established spare parts suppliers and succeeding across Victoria. A significant sign of this growth was the 1984 establishment of the first Burson Auto Parts interstate store located in Albury (NSW).

In 1986, Garry Johnson bought out his partner and was overseeing a strongly performing 15 store network by the following year. The key to Burson Auto Parts gaining a strong foot hold amongst the automotive trade was the company’s emphasis on supplying premium quality products to their customers, ensuring supply of locally and globally sourced leading brands to ensure the right part for the specific repair job, the first time. This is a commitment to the trade that has continued at Burson Auto Parts to this day.

The company’s steady organic growth continued and by 1996 the 25th Burson Auto Parts store was opened. Demand from the trade grew to the point that the company established a new, purpose built head office and 15,000 square metre distribution centre in the Melbourne suburb of Preston.

In the following three years a further 16 stores were added to the Burson Auto Parts network in New South Wales, along with a strong expansion into Queensland when the company acquired 11 Coventry Group stores in the sunshine state. The combination of store acquisitions and greenfield Burson Auto Parts locations that followed saw the company reach the milestone of 50 stores in 2004.

By 2011, with more than 80 nationally located Burson Auto Parts stores in the network, the company’s growth had been personally led and crafted by company founder Garry Johnson across four decades. Johnson’s small executive management team included Chief Operating Officer Andrew Schram, who spent a staggering 34 years by his side, having started in the role of Assistant Store Manager at the first ever Burson Auto Parts store in Braybrook.

The time had come to commence the next phase of this Australian automotive aftermarket industry success story and Burson Auto Parts was acquired from Johnson by Darryl Abotomey and the management team backed by Quadrant Private Equity in October 2011 with one clearly defined goal - to make Burson Auto Parts the number one national automotive aftermarket supplier to the trade.

True to this mission and under the new leadership of highly experienced Chief Executive Officer and Managing Director Darryl Abotomey, another major milestone was achieved with the opening of the 100th Burson Auto Parts store in May 2012. In the following year, the company acquired the Brisbane based Precision Auto Spares Group, adding another four stores to the network accompanied by the opening of an additional eight stores across Victoria, New South Wales and Queensland.

By 2015, Burson Auto Parts had become truly national, with stores located in every Australian state and territory, with the addition of an 8,000 square metre Brisbane based distribution centre to ensure greater interstate store stocking efficiency.

In line with the company’s exciting future growth plans, in 2016 Burson Group Limited became Bapcor Limited (ASX:BAP), an acronym of Burson Auto Parts, establishing a new corporate identity that covers Burson Auto Parts and all of the new business segments of the group. At this point the company began an exciting expansion into Asia, opening the first Burson Auto Parts store in Thailand, bringing world leading automotive aftermarket parts to this burgeoning market. A further five Burson Auto Parts stores have joined the Thailand network to date as the company continues to organically grow in the region, leading the way as the first Australian automotive aftermarket company to create its own brand footprint and automotive parts purchasing culture change in that country.

Now alongside the company’s iron clad continued commitment to the trade with Burson Auto Parts, the company became the region’s largest automotive aftermarket specialist company with an unparalleled footprint of trade, specialist wholesale and retail segments across more than 1,100 locations in Australia and New Zealand.

Throughout all of this time, Burson Auto Parts has continued its gradual, customer focussed national growth strategy, reaching 190 stores in October 2020 with record revenue growth achieved during the pandemic disrupted year. The Australian automotive trade’s favourite parts, tools, accessories and equipment supplier is on track to reach 200 stores within this financial year and is set to reach a strategic target of 240 stores within the next five years.

“This has been an exciting journey, with a great deal of worry and great achievement against inevitable head winds. Most of all it was a shared journey, initially with Ron Burgoine and then for the greater part with Andrew Schram, Terry Penney and all the staff at Team Burson. It is great to see both the excitement and the growth continue so strongly 50 years down the track,” stated Burson Auto Parts co-founder Garry Johnson, who remains a major Bapcor shareholder.

“The Burson Auto Parts story across its half decade history is one of how two Aussies with a good idea, sound automotive technical knowledge and a hard work ethic were able to create a brand with a level of service that has since become synonymous with automotive repairers across the country,” stated Bapcor Limited Chief Executive Officer and Managing Director, Darryl Abotomey.

“From the humblest of beginnings, this Australian company was able to forge its place against major opposition, with steady and gradual growth for as long as that could be achieved under private ownership. Now as the heart and soul of the Bapcor Group, we are privileged to continue the exciting Burson Auto Parts journey and establish a platform for continued success across the next 50 years,” Mr Abotomey added.

The Burson Auto Parts’ Golden Anniversary will be celebrated together with the company’s dedicated 1,800 team members, 30,000 loyal trade customers and more than 1,000 suppliers through a number of exciting trade promotions and events scheduled to take place throughout 2021.