TERRY PENNEY - ONE OF THE BURSON AUTO PARTS ORIGINALS 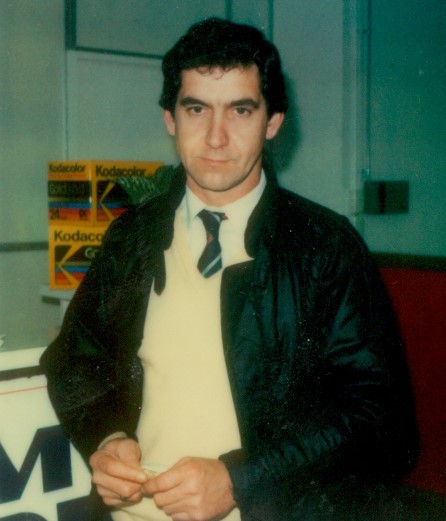 There are many people who have made invaluable contributions to Burson Auto Parts’ 50 years of success as the Australian automotive trade’s preferred supplier of automotive parts, tools and equipment.

One of the people that helped to create, nurture and build Burson Auto Parts from the ground up over his outstanding 32 year career with the company, is its former General Manager of Operations, Terry Penney.

Terry first came in contact with Burson co-founder Ron Burgoine while working at a service station in Melbourne back in 1972. Ron started doing business with the service station bringing carpet off-cuts sourced from Ford Australia that he and partner Garry Johnson had overlocked by a hard working team of women at his house, transforming them into mats.

These mats became incredibly successful, heralding the start of what was to come with these two Aussie automotive entrepreneurs. Gradually Ron and Garry expanded their range of parts and accessories that Terry sold on consignment at the service station. Terry recalls looking forward to Ron’s visits as he would bring fish and chips every Friday with their new deliveries of stock.

Terry was the mechanic at the service station and a fellow by the name of Andrew Schram (who would go on to forge an incredible 40 year career with Burson Auto Parts) was his apprentice. The quartet of Garry, Ron, Terry and Andrew had no idea at the time how integral each one of them would be in creating what has become an Australian automotive aftermarket business institution in the years to come.

Terry’s enthusiasm and professionalism was well noticed by Ron Burgoine, who told him that he had the “gift of the gab” and would be great in sales, offering Terry a job in 1975 as a Cash Van Driver with the now four year established Burson Auto Parts company.

Three years of being one of the top selling Burson Auto Parts cash van drivers followed, creating outstanding rapport with his trade customers. Terry would head to the company’s first warehouse in Heidelberg twice per week to replenish his stock and it was during one of these visits that Garry Johnson made him an offer that would shape the rest of his career.

“Garry approached me and said that they were looking at opening their first store, the former Lapco Auto Parts shop in Braybrook (Melbourne) that was complete with racking and was perfectly set up for us. Garry wanted me to manage it and despite not knowing a lot about store management - in fact nothing at all, I took the opportunity and quickly realised that I needed some help.”

“I called my mate Andrew Schram and told him we were opening up a store and I needed him on board. When he said “I don’t know anything about that” I replied with “Neither do I, but we are doing it!”, Terry recalls.

As Terry and Andrew had worked together before, they shared similar hard working ethics and gelled brilliantly as the first Burson Auto Parts store manager and second in charge. Both of the enthusiastic spare parts store debutants dived into their roles head-first and would actually compete with eachother as to who could do the fastest puncture repair or shelf stocking among many other duties. This is where Andrew started the role that would occupy the rest of his entire professional career, selecting the store’s stock in order to have exactly what their customers needed.

Terry and Andrew also actioned something from that first Burson Auto Parts store that forever changed the face of trade based automotive parts sales and service.

“We were looking at ways to improve our service to our rapidly growing numbers of trade customers. At that time, our competitors would do parts deliveries twice a day, once in mid-morning and once in the afternoon. We knew that our customers needed better service than that, so we introduced on-demand delivery of parts. This was incredibly successful for us, the trade loved having the parts as soon as they needed them and as we all know, this service is now a staple of the automotive parts business in Australia,” Terry said.

“I am very proud of how we were the first to do that, as having come from the workshop floor ourselves, we understood how important it was for workshops to get their parts as they needed them, in order to provide prompt service to their customers.” Terry added.

Garry brought his marketing prowess to our focus on customer service and promoted Burson Auto Parts as “The Fastest in the West” given our location and our emphasis on providing the trade with the fastest possible service. The synergies of Garry and Ron’s business expertise combined with Terry and Andrew’s auto mechanical knowledge were already becoming obvious.

Terry managed the inaugural Burson Auto Parts store for two years before the start of the company’s expansion with the opening of the Aussie company’s second store in the bustling central location of City Road, South Melbourne. Terry oversaw this super-successful store for three years before making the move to a new store closer to his home territory in Essendon, which as a mad Bombers fan suited him fine. After another successful four years there, Garry Johnson made

Terry another offer that would see his career continue to ascend with this burgeoning auto parts business.

“As the company was growing and given my experience with opening and running new stores, Garry asked me to become

a Store Supervisor overseeing the performance of some ten stores by that stage. This would occupy the next few years and it was a welcome break from the duties of stocktaking and replenishing stock by hand, writing invoices by hand to each and every customer, manual accounting of takings, banking etc - absolutely everything was manually done in the stores, computers were still a long way off,” Terry said.

“I had even put together a store set-up team and I would jump into the car with them and drive to each new store location and have it set up within a couple of days ready for business, no matter where they were along the Eastern Seaboard or in regional areas.

We continued the store expansion program for several years and I moved into the Heidelberg head office to work alongside Garry to plan new store locations to best suit the requirements of our growing trade customer base. Andrew Schram had also moved into the head office by this time, firmly focussed on locating, establishing, developing and securing relationships with premium quality product suppliers.

“Business was going extremely well, we had more stores and we had managed to develop a strong rapport with the trade. It was at this time that Garry and Ron Burgoine split, which was sad from my perspective as I was very close friends with Ron, it was because of his belief in my potential that I became a part of the company,” Terry stated.

According to Terry, “From that point my relationship with Garry became much stronger. His professional and personal guidance helped me so much in the years that followed. I never made it to secondary school, I had worked full time from the age of 14, so I was clearly not the sharpest tool in the shed, but I had a very determined, hard working ethic. Garry taught me so much and we remained side by side for the rest of my career.”

“We were extremely thin at the executive management level - for the entirety of my career it was Garry, Andrew and myself running everything. We knew then that the time was coming where the reigns needed to be handed over for Burson Auto Parts to take its next leaps forward. Darryl Abotomey and his Bapcor team has certainly done and continues to do this,” Terry stated.

“I am so incredibly impressed and proud at what Darryl and his team has achieved since taking over the company and making it a part of the Asia-Pacific’s largest automotive aftermarket company with Bapcor. They have some outstanding people who have grown and developed since I retired in 2007 and some incredibly impressive new people who have been integral to the company’s truly remarkable growth and success,” Terry said.

“I knew and I am sure that Garry and Andrew also knew that we had run our race with the company - we had taken it as far as we could. I had retired before Garry sold the business, as I promised I would at 60 years of age - and that was definitely the right thing for me to do as the stress for such a small management team was becoming too much. Andrew and I had gone from being mechanics in a service station to becoming company directors of one of nation’s top trade parts suppliers during our careers,” He stated.

“It was time for new leadership that respected and continued the successful business culture that the three of us had so carefully crafted over the years and I have been so impressed with Bapcor’s management, commitment to the Australian automotive trade and preservation of the Burson Auto Parts business culture,” stated Terry.

Aside from watching the company grow so strongly during his retirement, another source of extreme pride for Terry is that his son, Aaron, has followed in his father’s footsteps in working for the company. Aaron Penney is one of Burson Auto Parts’ National Key Accounts Managers, having joined the team in 2020.

The celebration of Burson Auto Parts’ Golden Anniversary represents an excellent opportunity to recognise Terry Penney, the first ever Burson Auto Parts store manager and his immeasurable contribution to the success of this outstanding Australian automotive aftermarket company.

News
TERRY PENNEY - ONE OF THE BURSON AUTO PARTS ORIGINALS